As we started our new year, what more better way than to welcome the year by doing Bhoomi Pooja for the construction of two toilet blocks at MPPS LUTHERAN ENGLISH MEDIUM SCHOOL. GORANTLA, GUNTUR… Our special thanks to Tr.Umesh Padia Area9 chairman & AFC Tr. Manish for gracing the occasion —- Tr. Surendra Sriram, Community Service & Blog convenor, 2019-20.

Kolkata Knights Round Table 293 and Kolkata Knights Ladies Circle 147 are proud to be associated with Iswar Sankalpa  – a centre for homeless men and women with psychosocial disabilities. Psychosocial disability is when a mental illness becomes pervasive and interferes in a person’s normal functioning and prevents them from being able to claim their rights or to participate in any social activity. People with psychosocial disabilities face several challenges like less or no access to basic services and exclusion. Iswar Sankalpa’s Sabari (center for homeless women) & Marudyan (center for homeless men) is the place for these helpless people where they are provided an environment to recover and then encouraged to lead a normal life by making them slowly get back into the society and earn a living. The women and men get access to mental healthcare and basic necessities to make the journey of social recovery. Iswar Sankalpa supports them through livelihood programmes and reuniting them with their families. It also works with homeless and psychosocial disabilities through the verticals of prevention, support and care and reintegration. 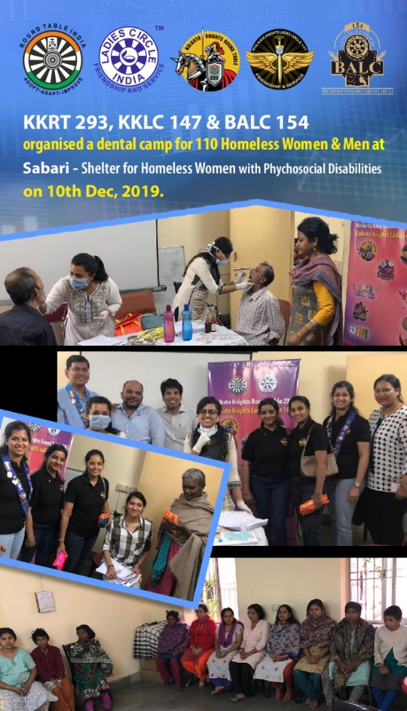 Till date we have done 4 different projects at this place. Our first project was done on 10th Dec, 2019 – a dental camp was organized for 120 people at Sabari. On the same day we also donated two hearing aids to two homeless women.

Recently, Iswar Sankalpa had organised their 13th Annual Program – Swar Sankalpa, on 9th February at ICCR Auditorium, Kolkata. The event was co-sponsored by us – KKRT 293 & KKLC 147. The program was graced by our Area Dignitaries – Area Chairman LMF Tr. Jeet Agarwal, Area Vice Chairman LMF Tr. Amit Jain and Area Vice Chairperson Cr. Nidhi Khetawat. Tollywood actor Abir Chatterjee was also present at the event and encouraged all the participants. Jeet Agarwal and Abir Chatterjee addressed the audience to spread awareness about the Psychosocial Disability. Few short films were shown at the event that showcased the difficulties faced by homeless women followed by a dance performance choreographed  by the residents of Iswar Sankalpa.

Our 4th project was done on 15th Feb, 2020 where we donated weighing scales and blood pressure machines at Marudyan. These instruments will be used in the mental health checkup wards at Iswar Sankalpa. All-in-all a very needy place and they seem to be doing great work for betterment of the society.

On 4th October we did the inauguration of 3 class rooms in “New English High School” Kundaim, goa, in association with P&G through “Shiksha”. 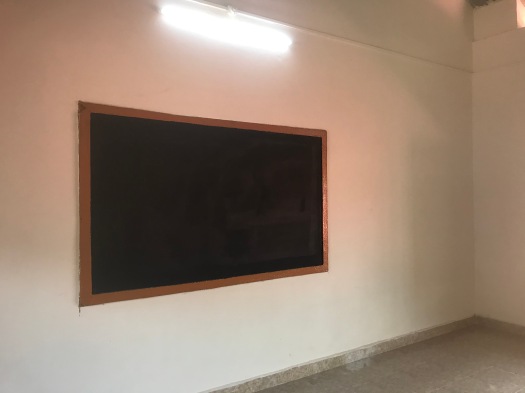 it was an emotional movement as we are giving back to society to bring a change through education, the event was attended by Tr.Alok and Tr.Sachin Sha the chief guest for the event was Mr.Mahim Agarwal (P&G Plant manger). their is a saying “people can steal your name , your money, but they can never steal your knowledge and education” its an only asset which is only yours.

To be marked as a special day in the calendar, might be a day helping the eco system bounce back with our action. A day to restore nature needs to be undertaken on massive scale. 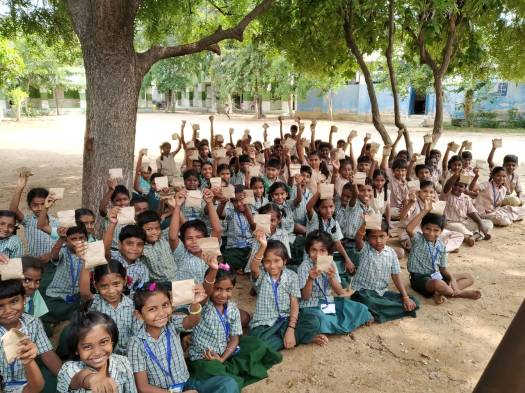 It’s always natural to be worried about global warming but changes occurs only we sow something relevant, a brilliant move of chairman Tr. Dharmaraj ESRT 211. I can say rather than talking about halting the usage of fossil fuels, bursting crackers, factory outcomes etc. but emphasized on sowing and showing right things at the right time for the younger generations.

“Vidhai siriyathu vidai periyathu” An integrated event of sowing neem seeds around Erode. It is one such plant for which we revocated the patent from US department of Agriculture Ending an 11-year disputes. Around 17000 volunteers among that 11000 school children eagerly participated in spreading such a plant with higher traditional and medical values.

More than 100 private sectors came front in doing it. 20lakhs seeds have been procured from the corners of the state and ensured every bunch for the proper sprouting. The fabulous work started with the amazing work of people around Erode. It symbolises the harmony between three realms: Land, sky and water.

“Trees are poems that earth writes upon the sky. It have been the nexus of the human connection, a timbered memory of

Our drive just did not stop here.

Byrt 201 with the help of AT INKS Built two classrooms and Toilet Block for Indranagar Primary School  located at Ankodia, Vadodara.  The school has strength of 150 students

Baroda YoungTurks Round Table #201 (BYRT201), a “Table” of Round Table India (RTI) under the initiative called “Freedom Through Education” undertakes projects to improve / provide education enabling infrastructure in government and private institutions which are themselves unable to fulfill their requirements due to financial and administrative constraints.
Under the Initiative of “Freedom Through Education”, BYRT 201 identified Indranagar Primary School, a school in the Ankodia area of Vadodara and their need to replace  2 of their old classrooms which were in a dilapidated shape and were not being used. They also need to renovate old Bathroom into two seperate toilet block for girls and boys.  BYRT 201 alongwith the school assessed that by reconstructing these 2 classrooms, 150 children could be benefited. The building has been designed to accommodate additional 2 classrooms on the upper floor for the future needs of the school and the village. The classroom were handed over on 17th November and inaugurated by Area 11 Chairman Nilesh Gupta. By Renovating and seperating the toilet block for Girls, The school expects more girls willing to attend the school. The funds for the construction of class rooms and toilet block were generated by various resource mobilizing events, contributions from BYRT201, Round Table India FTE and RTI ASSIST along with CSR grant from AT INKS.

In the past BYRT 201 have extended their support to education institutions like Indiranagar Koyali Primary School, Gavasad School, Spandan School, Jaspur school, Sisodiyapura school, Malvankar school, Homibhabha school, MS Patel Kumar Chartralaya and Shardamandir Kindergarden school. Through these projects many goals set by BYRT 201 like increase in number of students, increase in the percentage of girl students, improvement in attendance at schools, improvement in hygiene environment, improvement in performance of students, etc. have been achieved.
BYRT201 has also extended support to other institutions, for their specific needs outside education infrastructure, such as the Blind Man Association, Mother Teresa Home (orphanage), Koshish (learning centre for special children), Hindu Anath Ashram and  Gayatri Viklang Manav Mandal.

Guwahati City RT 239’s All 21 Tablers RENEWED the General Insurance on 16.11.19, having GCRT 239 Table Trust Account As The Beneficiary Of The Policy. In Case Of Accidental Death Of A Member Of GCRT 239, the Trust Account Would Receive A Sum Of Rs. 10 Lakhs. God Forbids, if Any Such Unfortunate Accidental Event Happens, The Proceeds Will Be Used for our flagship FTE  ( Freedom Through Education ) In The Name Of The Deceased.

Total Insured Amount By The Table Is 2.1 CRORE (Rs. 10 Lakh Each of 21 tablers). Premium Of The Same Is Being Paid By the tablers themselves and Table Trust Account Being The Beneficiary. Period of Insurance is 17.11.19 to 16.11.20. The Insurance Is Done At A Well Negotiated Premium Of Rs. 300 Per Tabler Per Year For Rs. 10 Lakhs Sum Insured. This Is For The Third Consecutive Year That GCRT 239, Has Done The RTInsure.

THIS IS NOW A CONTINUOUS PROJECT DURING RTI WEEK BY GCRT 239, STARTED WITH OUT-OF-THE-BOX PROJECT THOUGHT 2 YEARS AGO.

Its been an overwhelming day with huge numbers participation in spreading the awareness of child abuse and good touch bad touch by conducting a rally from NTR stadium till Sankarvilas covering over 4kms in the early morning of Monday towards the RTI Week message.

Over 300 students from Guntur Medical Collage, VVIT engineering college, along with our Tabler’s have participated in the entire walk to create an impact towards the awareness of Child Abuse.

And the same been covered by the press to extend their support in this prestigious event.

To appreciate the volunteer’s effort & dedication we have arranged breakfast and confectioneries. Our sincere thanks to Arundelpet police station for extending their support in making a successful event.

It’s been an eventful start of the month by donating 1000 lts water storage tank. For an under privileged school who are in need of water provisions for the 750 children studying in the pradhamika division of the SKBP Municipal school. It’s been a very heart filling seeing the receiving of the kids & their appreciation by thanking us constantly and wishing us all the best for many more such activities…

Thomas Keller once said “ A recipe has  no soul .You as the cook must bring soul to the recipe” .

The 77ers had a pre Diwali boys cookout on a Sunday evening . The stage was set at White house .  The agenda was to see what the men can cook up , literally . It was time to get the men out of their comfort zone and put their culinary skills to the test . We had live counters that were manned by our very own 77 boys .

Warning : This is a recipe  for disaster ( so we thought )but atleast it would be fun . 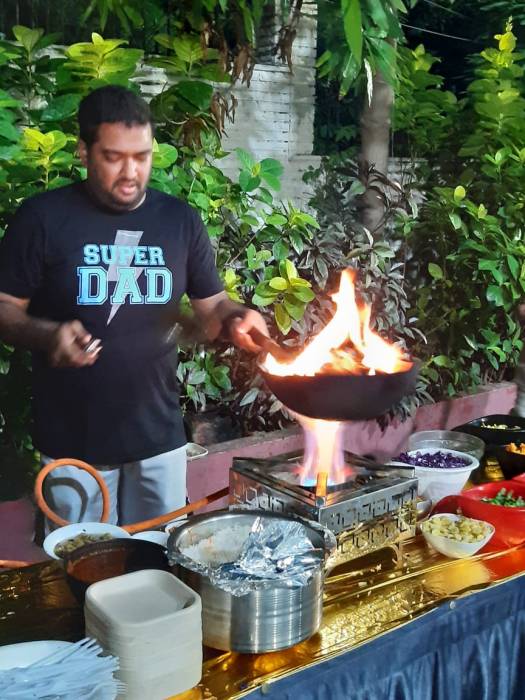 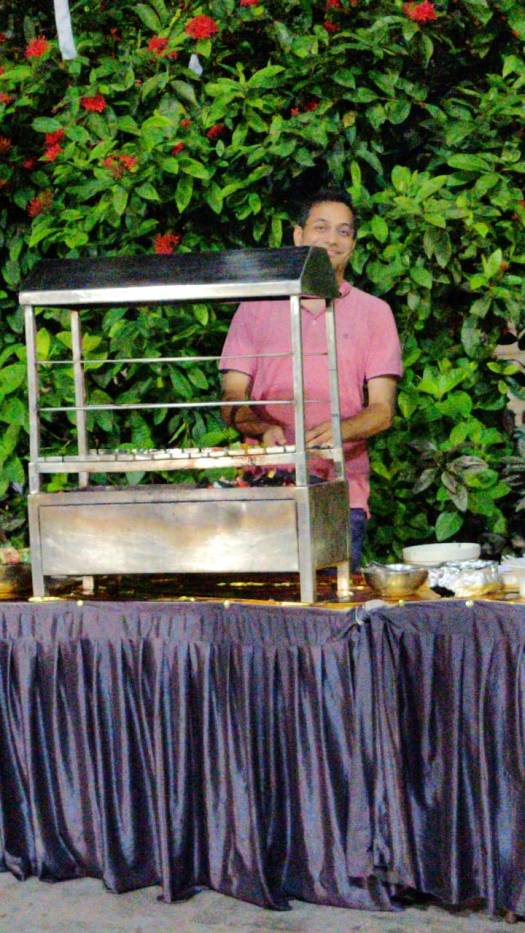 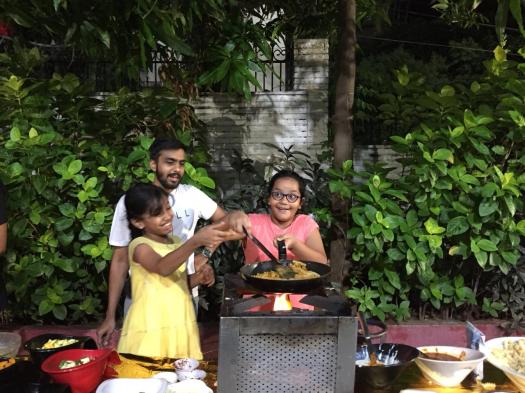 It actually was a lot of fun and we were pleasantly surprised that the food actually came out really well . The active involvement of tablers who had knowledge of how to cook along with the encouragement of the ladies and participation of twinklers made it an interesting. event There were many dishes that were made like paneer  , pasta , mangolian rice etc. There was also baking station too where the twinklers and tablers learnt how to bake  a cake . It was nice to see the twinklers enthusiastically participating in the cook out exhibiting their exceptional culinary skills

Along with the cookout , with Diwali around the corner , the twinklers team planned a diya painting activity for the kids where they showcased their artistic talent . They painted the diyas really well as the diyas looked very colourful . The kids had such a blast . All in all , it was quite an enjoyable evening Cooking is an art and so also painting both being productive activities , when we put them together  it was a recipe for increased bonding.    We had a good turnout as well . A Sunday evening well spent .

A Very Happy Diwali Celebration at FTE school at

Diwali is a time to celebrate with friends and family! And we at Kolkata Knights Round Table 293 & Kolkata Knights Ladies Circle 147 did the same – we celebrated Diwali with kids of our FTE school at Swapnopuron Shishu Shiksha Niketan at Hingalganj, Sunderbans. There are 110 kids at this school and we arranged a workshop on Diya, Rangoli and Gel Candle making with the kids. To top it off, we also burst fire crackers with the school kids. 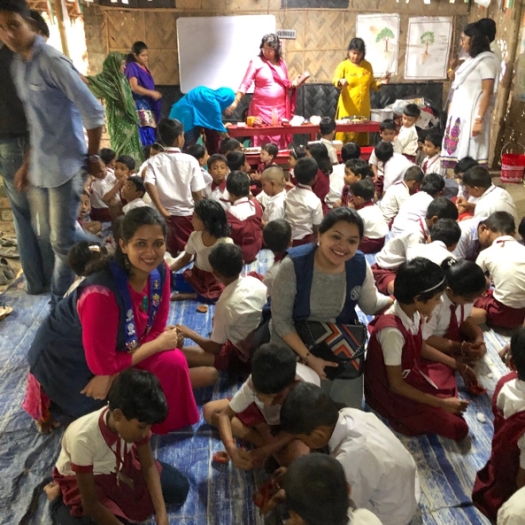 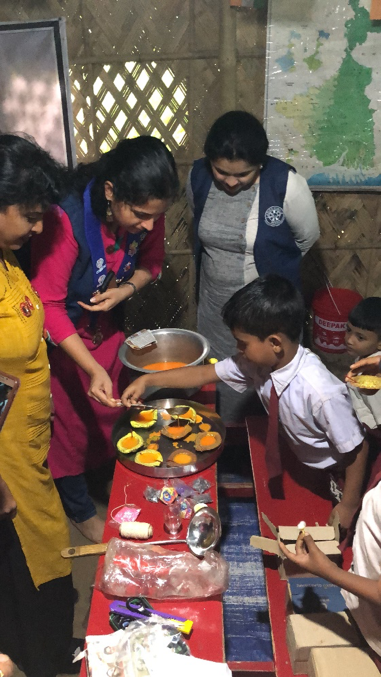 What struck us the most during this workshop was that all students showed great enthusiasm. We ourselves had never done something like Diya and Gel Candle making and the whole thing seemed very interesting to us as well. The instructor did a great job to keep the students focused and attentive. 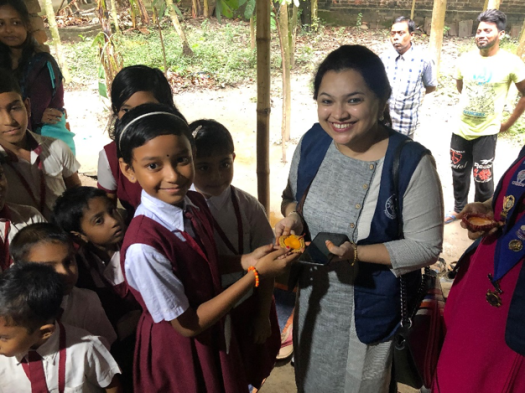 The workshop ended well and students gifted us with the Diyas and Candles made by them. Bursting fire crackers was of course very exciting for the kids and the smile on their faces said it all!

Overall a very nice Diwali celebration! The kids thoroughly enjoyed it and so did we! 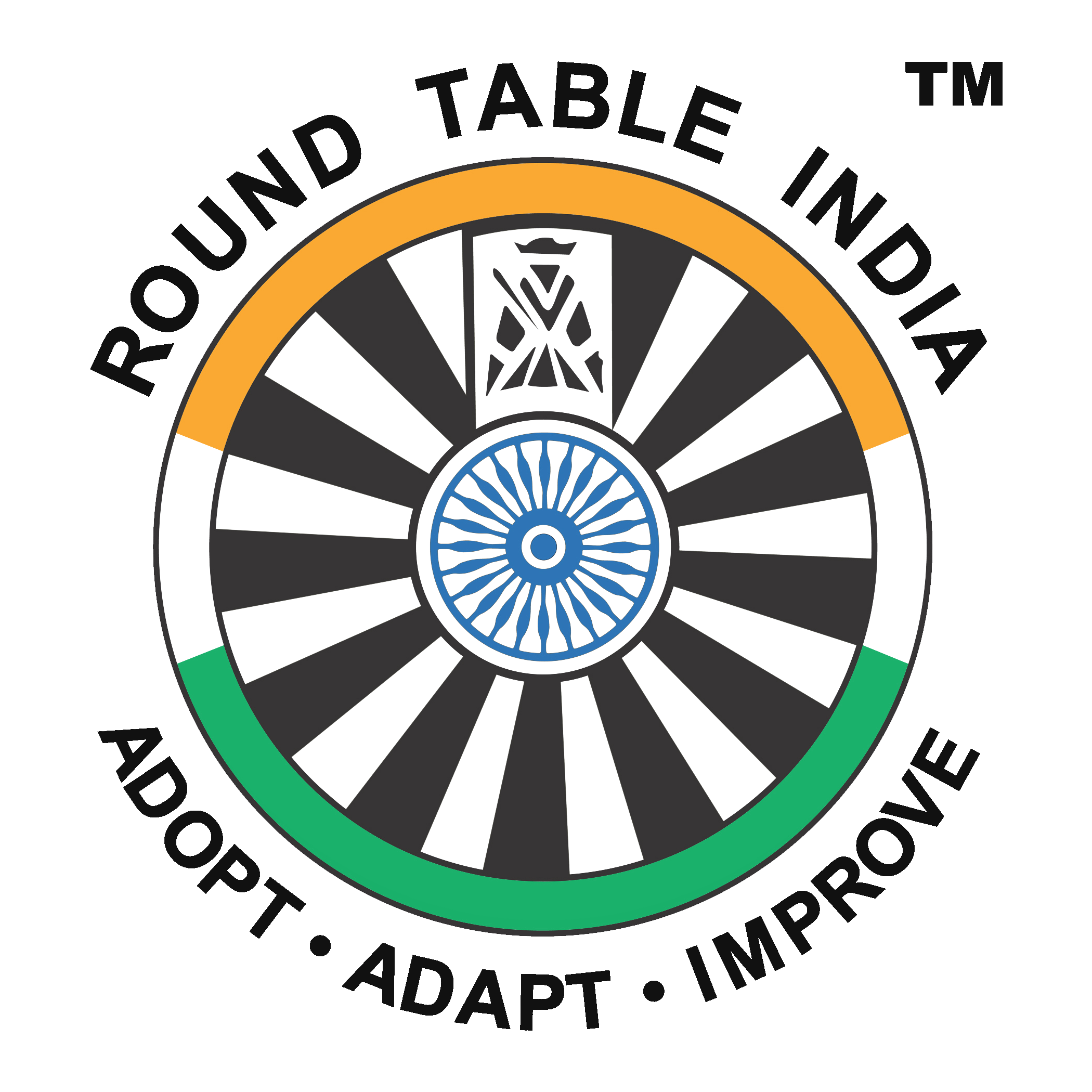 Our National Project is "Freedom Through Education" and our main aim is to educate underprivileged children.

To Read Our E Newsletter On Projects and FTE work Click http://issuu.com/bajajkutir/docs/rti-fte_projects-news-1

Round Table India is divided into 16 Areas. Click here for more info.